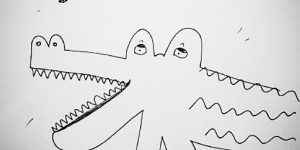 Not sure where to start? Here's what we came up with when we gave it a try:

Poor Smile the Crocodile
Wouldn’t hurt a fly,
But the others didn’t know.
When they saw him, they’d always run and hide.

You see, the thing with Smile
Was he walked with mouth agape,
Tongue and teeth all hanging out,
People feared the worst possible fate.

But Smile didn’t want to eat people at all,
His diet: mostly fish, turtles and birds,
Anything he could swallow in one big gulp,
Chewing not an option or choice he preferred.

See, one day, quite some time ago,
It had been a warm and sunny day,
Smile stretched and let out a massive yawn,
And what came next is what scares people away.

For at the height of his great big yawn,
With his jaws at the widest point,
Smile suddenly heard a POP!
And his jaw was locked, right at the joint!

In surprise, he moved to shut his mouth,
But even an inch it would not close.
He panicked and roared for help,
Alarming all around when they saw his pose.

Smile moaned and groaned to no avail,
For no one could understand his Ahhhrs and Uhhhrs,
The poor crocodile desperately sought
A dentist, a vet, or even a nurse.

But no one was willing to wait and to listen
To a “Dangerous ‘Dile Out on a Man-Eating Feast!”
Until little Sally, hidden from view,
Piped up and said, “He’s not dangerous in the least!”

From her vantage point, way up in a tree,
She had noticed the poor crocodile’s plight:
That he couldn’t move his mouth at all!
And certainly wasn’t trying to put up a fight.

She bravely approached, slow and steady,
Until her hand rested on the sad croc’s head,
She gently pressed, massaging his jaw,
Cooing calming words, humming a lullaby instead.

Soon ol’ Smile relaxed,
His racing heart slowing down,
He breathed a deep sigh,
Quietly lay down on the ground.

Then just like that,
Smile felt one more sleepy yawn coming on,
And with brave Sally by his side,
The lock on his jaw unlatched and was gone.

Smile turned to his saviour,
His lips revealing a big grin,
And little Sally returned the favour,
Making Smile and Sally, for a moment, like twins.